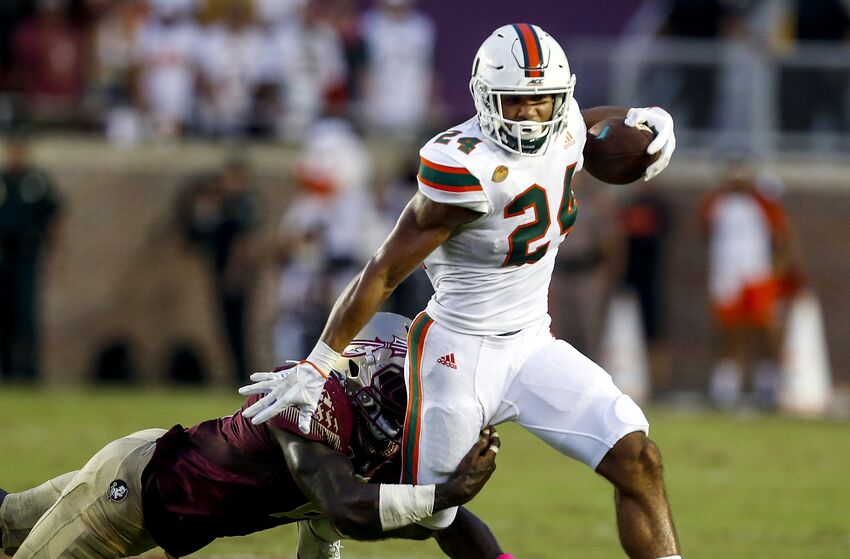 The Canes hope to build on their success against the Seminoles from last season when they ended a seven-game losing streak to FSU. The Miami Hurricanes are coming off of a 47-10 destruction of North Carolina in their ACC Opener at Hard Rock Stadium. Miami inexplicably dropped one spot to 17th in both polls this week.

Florida State enters the Miami game a very soft 3-2. The Seminoles were had to rally to take leads with less than five minutes remaining against FCS Samford and with 1:13 remaining against Louisville on Saturday. Willie Taggart’s debut season has been shaky at best.

Miami enters the game against Florida State as the only ranked team in the rivalry. The Hurricanes are 5-0 all-time against the Seminoles when they are ranked and Florida State is not. Miami won 24-20 in Tallahassee last season when they were ranked 13th and FSU was unranked.

The other Hurricanes victories over an unranked Florida State team came in 1956, 62, 73 and 83. Miami outscored Florida State in those five games 82-59. Saturday’s game will also be the third time that Miami enters the Florida State game as the higher ranked team.

Related Story: Miami Hurricanes own FSU when they meet as ranked teams

In spite of all those factors in Miami’s favor, the Hurricanes still expect a dogfight Junior defensive end Joe Jackson told the Miami Herald.

“These games always turn into a dogfight, whether you blow them out in the end or not…These rivalry games always happen to be a dogfight. So we’ve got to come prepared and make sure we don’t have any self-inflicted wounds.”

Florida State has its own facts to draw on for Saturday’s game. The Seminoles have not lost to Miami in South Florida since 2004. That goes back to games at the Orange Bowl. Hard Rock Stadium has been the Miami Hurricanes home field since 2008.

Miami did defeat Florida State at Hard Rock Stadium in the 2004 Orange Bowl game and then again later that year in the Orange Bowl Stadium.

The Miami Hurricanes enter the 63rd meeting with the Seminoles with a 32-30 all-time edge. It’s always a big game when Miami and Florida State play but its also just another step for the Hurricanes to reach their goal of winning the ACC Coastal Division for a second straight season.

Next: Multiple reasons Miami is favored against Florida State

Florida State is the last of the Hurricanes three-game homestand. They defeated FIU last week 31-17 before Thursday’s demolition of North Carolina. Miami gets an extra two days off for the Seminoles. Florida State had to win on the road at Louisville on Saturday and travel to Miami this coming weekend.