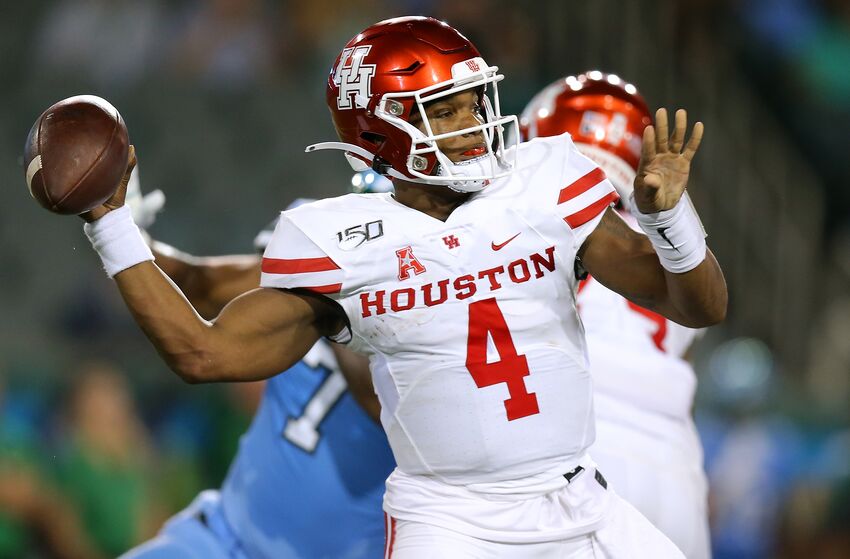 NEW ORLEANS, LOUISIANA - SEPTEMBER 19: D'Eriq King #4 of the Houston Cougars throws the ball during the first half of a game against the Tulane Green Wave at Yulman Stadium on September 19, 2019 in New Orleans, Louisiana. (Photo by Jonathan Bachman/Getty Images)

Former Houston quarterback D’Eriq King who entered his name into the transfer portal on Monday night is reported to be considering the Miami football program.

Former Houston Quarterback D’Eriq King‘s announcement on Twitter Monday night vaulted him to the top of available transfer players at the position. King is reported to be considering the Miami football program and Arkansas less than 24 hours after his announcement. The Hurricanes have reportedly reached out to King.

King played four seasons for Houston. King took advantage of the new redshirt rule when he decided to sit out the remainder of the 2019 season after playing in four games to maintain a year of eligibility. The 5’11 195 pound QB completed 61.8 percent of his passes for 4,925, 50 touchdowns and 10 interceptions with Houston.

King would fit perfectly into new Miami offensive coordinator Rhett Lashlee’s spread oriented system. The Miami football program is going to need a true dual-threat QB. In four seasons at Houston King ran for 1,421 yards and 28 TDs. He also showed the versatile athlete he is by returning 10 kickoffs for 254 yards and a TD in 2016.

Uncertainty at quarterback over the last two seasons has led the Miami football program to a frustrating 7-7 cumulative record in 2018 and ’19. Rising redshirt junior N’Kosi Perry shared signal calling duties with then redshirt senior Malik Rosier in 2018 and with redshirt freshman Jarren Williams in 2019.

I’ve entered the portal I think it’s best for me and my family!

The numbers in the Miami passing game have been over-described throughout 2019 season. Manny Diaz firing former Hurricanes offensive coordinator Dan Enos after one season that clearly did not work was a positive move. Lashlee’s system should bring the offense for the Miami football program into the 21st century.

In addition to Arkansas and Miami, defending National Champion LSU will be a program to watch in the recruitment of King. Baton Rouge is only five hours from Houston on I-10. The Tigers could be looking for an experienced QB after 2019 Heisman Trophy winner and record-setter Joe Burrow played his last game for LSU.

Next: Miami will enter 2020 with UNC ACC Coastal Favorite

Nick Kosko of 247Sports reported Tuesday afternoon LSU is the favorite to sign King with Arkansas second and Miami third. It will be very difficult for Miami to beat out LSU to sign the dynamic QB. One potential suitor was eliminated last week when former Wake Forest QB Jamie Newman announced he was transferring to Georgia.