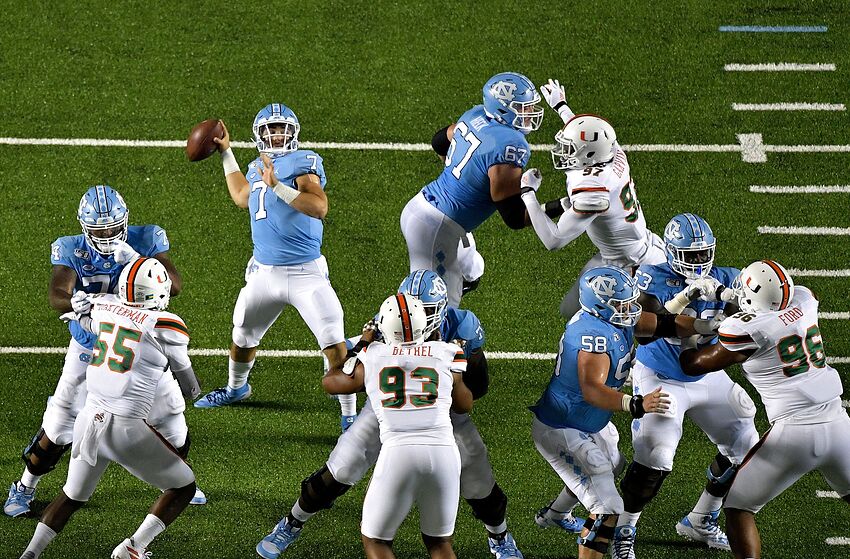 CHAPEL HILL, NORTH CAROLINA - SEPTEMBER 07: Sam Howell #7 of the North Carolina Tar Heels drops back to pass against the Miami Hurricanes during the first half of their game at Kenan Stadium on September 07, 2019 in Chapel Hill, North Carolina. (Photo by Grant Halverson/Getty Images)

The conclusion of the 2019 college football season on Monday night in New Orleans is the beginning of the 2020 season the “way too early top 25s.” North Carolina will enter 2020 as the favorite to win the Coastal over the Miami football program.

The ACC Coastal Division title by preseason favorite Virginia culminated a seven-year stretch with every program winning one title each. The cycle will start over in 2020 with 2016 ACC Coastal Champion North Carolina likely to be the favorite. The Miami football program won its only ACC Coastal title in 2017.

The Miami football team were the preseason favorite in the ACC Coastal 2017 and finally lived up to winning what many presumed would be a frequent appearance in the ACC Football Championship game. The Hurricanes will enter the 2020 offseason without a lot of fanfare. Miami should be a 2020 contender in the Coastal.

Miami has not lost a game to the Coastal Division Champion since losing a tight 20-13 game ironically to North Carolina in 2016. The Hurricanes won the title in 2017 and defeated Coastal Champions Pittsburgh and Virginia at Hard Rock Stadium in the last two seasons. With all the complaining about losses that fact has been obscured.

The consensus and nearly unanimous of the “Way too early Top 25” lists has North Carolina on the fringe of the nation’s silver list of top teams. The Athletic, CBS Sports, ESPN, The Sporting News, Stadium and Yahoo Sports all have the Tar Heels ranked between 21-25 entering 2020. The biggest difference for North Carolina is at QB.

Sam Howell returns for his sophomore season after a breakout out campaign as a freshman following his flip from Florida State to North Carolina. Howell completed 61.7 percent of his pass attempts for 3,641 yards, 38 touchdowns and seven interceptions. The Tar Heels narrowly defeated Miami 28-25 in Chapel Hill in 2019.

A sizeable percentage of the Miami fan base perseverates on the fourth and 17 that Howell and North Carolina were able to convert. The fact is with a good kicker the outcome against the Tar Heels could have resulted in a Miami victory. At the very least the game almost definitely would have gone to overtime.

Kicker Bubba Baxa began his season-long struggles in the loss to North Carolina. Baxa missed an extra point and two field goals against the Tar Heels. The missed extra point made a huge difference in the game. The PAT would have tied the game at 20 in the third quarter. The missed PAT forced Miami to go for two later in the game.

When North Carolina scored proved what would be the game-winning TD with 1:01 remaining in the game the Tar Heels took a 26-25 lead and extended their lead to 28-25 with a two-point conversion. If Baxa makes the extra point on the third Miami TD the Hurricanes and Tar Heels would have been tied at 27 late in the fourth quarter.

Baxa would later miss a potential game-tying field goal. It could easily be stated that it is oversimplifying the outcome of the game by focusing on the kicker but it was critical in this case. The Hurricanes had kicking woes throughout the entire 2019 season. The Miami defense rebounded from some early mistakes.

Next: Miami must leave past behind and look towards future

In Blake Baker’s first season a defensive coordinator Miami finished in the top 15-20 nationally in nearly every category. The Tar Heels should be the ACC Coastal Divison preseason favorite in 2020. The game between the Hurricanes and Tar Heels, this time in Miami Gardens could decide who plays in the ACC Championship game.